Annemiek, lung patient and specialist of her own life

‘I always say to others; just do it!’

Five years ago Annemiek suddenly became very sick one day. She was often out of breath because of a combination of COPD and asthma, and spent two weeks in intensive care after a serious lung attack. Fortunately things went well. After she survived the medical crisis Annemiek wanted to take the next step in recovery and joined a specialised outpatient process with Ciro. These sessions are still making a difference to her health.

"Before my treatment, I had been involved at the Ciro organisation as a member of the client council," says Anne. The clients represent the patients’ best interests. "I noticed how much of a difference the Ciro programs could make for other patients. And then I became a patient. "

Annemiek discussed her case with a pulmonologist and asked to be referred to Ciro. "Fortunately he agreed this idea. I wanted to be independent and move forward. I often have shortness of breath, and my lungs still function, but only at 20 percent. When my children were small I first noticed signs of it, such as when I was cycling. It was quite hard to ride over a bridge. In the beginning I avoided these kind of triggers, but later the effects of my condition kept getting worse."

"My health goes up and down, but I try to make the best of it. In 2011 I started a day treatment plan at Ciro. This means each weekday – 40 days in my case – I go to Horn to follow the program that starts at 8:30 am. In the early in the evening I return home. This plan has worked well for me."

At that time, it wasn’t known that Annemiek not only had COPD and asthma but also disease (CVID). This means that her immune system does not function well and she can become ill very quickly and often. To counter this Annemiek was given a blood transfusion with medication from donor blood every three weeks. "If I'm with a group of people and someone has flu, I get sick. All this combined with my lung disease makes it difficult to predict how I feel on a particular day. " 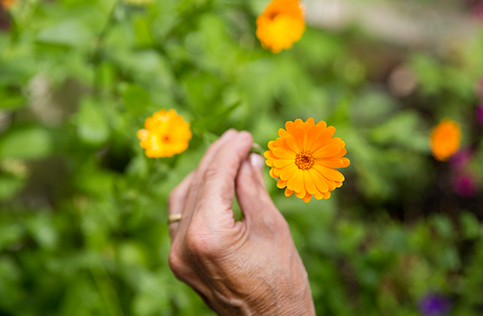 Annemiek underwent the standard three-day assessment for patients where we took a variety of measurements. Then we customised a treatment plan that involved a team of specialists and also included her personal goals. Of lung occupational therapy.

"The treatment doesn’t just work on my fitness. I also benefited greatly from discussions with the psychologist, which helped me learned to better accept my disability. Of course I have days where I need to cry, but it is what it is. The special treatment with NMES really helped me."

NMES is a workout that consists of electrical impulses to the leg muscles using a muscle stimulation device. It helps to strengthen these muscles and offers a good outcome for patients with severe shortness of breath and weakness.

Annemiek looks back on her stay: "I found the whole experience to be really good, especially the staff and in particular, the nurses. Before I went to Ciro I could only walk with a walker, and now I can walk small distances without a walker."

Because Annemiek’s lung volume is very low, she uses oxygen day and night. Despite not having much energy Annemiek tries to get out with her scooter as much as possible. She also enjoys working in the garden in a raised planter that her husband built just for her.

The Limburger likes to share her experiences with others. "I try to encourage other who have the disease to go to the Lung Forum (Forum of the Lung Fund). The problem is that otherwise you will end up isolated from people. Sometimes I sit in a restaurant with my oxygen and can see people asking what I have. Fortunately, this doesn’t bother me." Annemiek’s husband has been her pillar of strength. He makes it possible for them to do more together and encouraged her independence.